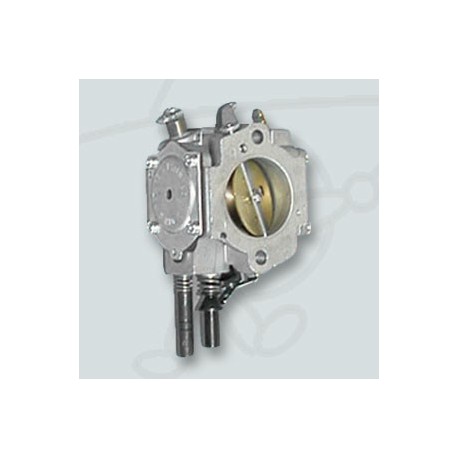 Delivery time about 5 days. Consult us

The carburetor used to prepare a mixture of air ( oxidizer) and fuel to form the optimum mixture for it to burn completely in the combustion chamber.
Adjust the speed and torque of the engine carburetor to function.
The ideal theoretical air fuel ratio and / or to the internal combustion engine is 14.7:1 14.7 grams of air per 1 gram of fuel . This is called stoichiometric mixture .
In practice, to achieve ideal combustion and allow fuel economy , they burn a / air fuel ratio of 18:12 .

When the engine ignition , depression is too low to draw fuel and dosage is very low in gasoline. Moreover , the engine is cold , the fuel evaporates and forms little fuel droplets which are more likely to deposit on the cold parts of the inlet , instead of spraying and mixing with the air .
The problem is solved by the use of a choke device ( French choke , choke in English ), which allows the mixture to be enriched fuel during startup . The objective is the proportion deréduire air , via a suction component .

The plug this carburetor vacuum is actuated by a pressure-sensitive diaphragm ( to replace when the engine has not turned a long time) .
This system prevents the stalling in case of sudden throttle, because even if the throttle is wide open , the valve does not respond to the aspiration of the engine is low and therefore does not require a large amount gas carburizing thus regulates itself .