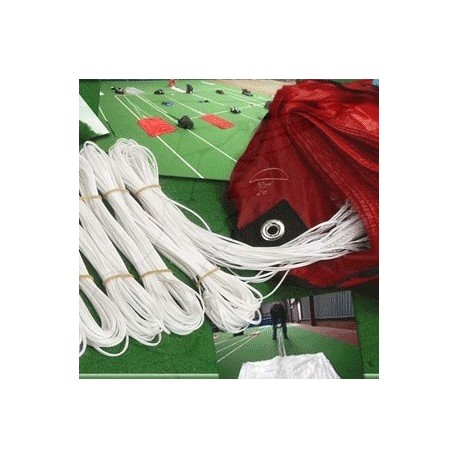 We Ventilate and fold the dome, square or Rogalo type parachutes and check your extraction pod.

Send your order with your parachute and your pod (important as it is also checked) to:

It will be returned as soon as possible, airy and folded.

To keep your parachute extracting as short as possible, it needs to be aired and folded up every year.

At MosAiles, we have been offering this service since 1993 for all forms of parachutes.

On request, we are also able to offer folding courses for groups in order to bring pilots towards more autonomy.

The reserve parachute is now part of the basic equipment of the paraglider and paramotorist. This is passive safety, like the helmet, back protection (foam, airbag or Paramotor cage).

While more and more pilots are equipped with backup equipment, they generally lack the most basic information to ensure its proper functioning. Do not think that using a reserve parachute is all about pulling a red handle because there are many constraints:

- pre-flight: check the position of the needles.
- maintenance: air the parachute at least once a year
- use: do not stay hooked to the handle when taking off or during voluntary withdrawal.

Here are some answers to common questions pilots ask themselves:

When do I pull the handle?

Irreversible departure from the flight envelope caused by:
- a collision in the air.
- the use of a wing that the pilot's level does not allow to manage
- equipment failure (favor an annual review of your equipment).

Which parachute to choose?

The reserve parachute at APEX:

It is equipped with a central line allowing the top of the parachute to be curved and its fall rate to be reduced.

Composed of a short line cone and has no central chord.

- a little more expensive than the Apex.

It has a triangular shape and is airship.

Which backup position to choose on the harness?

All positions have Advantages and Disadvantages.

In the lower back:

Upper back (behind head):

Has disappeared in paragliding but remains present in Paramotor.

A position abandoned on paragliding harnesses but still used on paramotor harnesses.

- asymmetry of weight in the harness

The subcutaneous position is the most used in paragliding and almost unknown in Paramotor.

- frequent contact with damp ground
- check that if the board breaks, it does not prevent the rescue from being extracted

Why does the reserve cone have to be shorter than that of the wing?

So as not to experience wing depression which would prevent it from opening or deflate it.

How do I attach the reserve parachute to the harness?

The reserve parachute is connected to the harness using specific straps
- The parachute riser / straps connection can be made with a lark's head or with a link (eg: 7mm). In this case it is easier to remove the reserve from the harness.
- La liaiso